Results of the 2020 Statewide Elections In a year of historic voter turnout, voters across the country cast their ballots for important education leadership positions and on ballot measures that impacted education systems. We provide an overview of the results on our elections resource page, and here, we provide a more detailed breakdown of the results and how they could impact education going into 2021. (For more information on which states had races and ballot measures, please see our earlier post.) 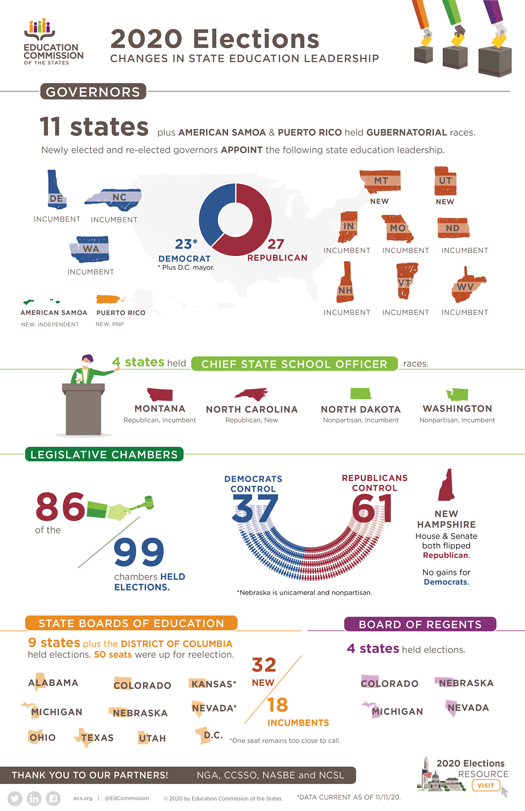 See our infographic for a full breakdown of this year’s election results.

This brings the partisan split to 27 Republican governors and 23 Democrat governors.

These newly elected or re-elected governors have the authority to appoint other important education leadership positions in their states:

Chiefs have different authorities depending on their state’s constitution, statutes and regulations, but some of the authorities these newly elected and re-elected chiefs have include:

Some of the authorities the newly elected or re-elected board members have include:

Four states held state or system Board of Regent races for 15 seats – Colorado, Michigan, Nebraska and Nevada. Some of the authorities the newly elected or re-elected regents have include:

Some of the authorities — related to education — that the newly elected or re-elected state legislators have include:

Our elections resource page has more information, including an interactive graphic of the 2020 results, a downloadable poster and an archive of past years’ election coverage. Next Story:
Supporting Student Wellness Through the Arts